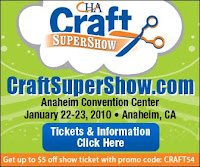 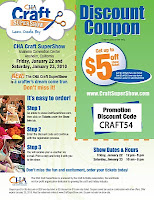 In addition to the regular Retail Winter CHA (Craft & Hobby Association) show this year, CHA is also hosting a Craft SuperShow, which is for Consumers/Crafters.  It's also at the Anaheim Convention Center (directly across from Disneyland!!).  The dates for the Consumer Craft SuperShow are Friday, January 22 & Saturday, January 23, 2010. It is open to anyone who purchases tickets!!

If you want to go to the (Consumer) Craft SuperShow & would like to get a discount on the purchase price of your tickets, feel free to use this code (from my site) : CRAFT54.

All the information about this show can be found following the link shown in the ad above: http://www.craftsupershow.com/

I hear there's a lot of folks from the Cricut Message Board that are going to the Craft SuperShow & then meeting up on Saturday evening over at Bubba Gumps (across the street in Downtown Disney).  If you want to meet up with all of us crazy Cricut people, go onto the Cricut MB & send a PM to ScrappinKittyRN, who is organizing this dinner event!!  Hope to see you there!!!!

***FYI---Please be aware, there has been some confusion about the two separate & distinct upcoming CHA Shows. Purchasing tickets to the CHA Craft SuperShow admits you to the Consumer CHA show only!!! It will NOT admit you to to regular Retailer/Manufacturer Convention, which begins AFTER the Consumer show is over!! In order to be admitted to the Retail CHA Conference, you MUST have a valid Badge, only available to those who are registered members in good standing of CHA (retailers, manufacturers & designers) & their employees.

Please share your thoughts by posting a comment here!!! Your thoughts / suggestions / comments will help this Blog evolve into the community of shared learning I so very much want it to be--for ALL of us!! Thanks. GLENDA

Popular posts from this blog

September 12, 2014
WOOHOO, YIPPEE, YAHOO!! FINALLY--the brand new, much anticipated, longed for, and much sought after Close to My Heart Cricut cartridge, ARTFULLY SENT, is now ready to order on my shopping site. Click right here!!     I WANT YOUR BUSINESS!! I really want you to order this cartridge from me!!!  This is WITHOUT a DOUBT, the most amazing Cricut cartridge that has ever been released!  You will be astonished at all that it can do!!! CLOSE TO MY HEART ARTFULLY SENT CRICUT CARTRIDGE It comes with: The Close to My Heart Artfully Sent Cricut Cartridge. 3 - My Acrylix D-size stamp sets that were designed specifically to beautifully complement this cartridge. 1 - 12"x12" White Daisy Cardstock pack.    Here is my special:   Everyone who orders ARTFULLY SENT , or any of the OTHER 3 CTMH Cricut cartridges on my shopping site , from now through Fri. Sept. 19th, will get their choice of ANY "B"-sized stamp set FREE from me (see just a few samples bel
3 comments
Read more

March 06, 2009
OK, the end is near!!!! (Oh nooooooo, not "THAT end”!!!!) No, the end I’m speaking of is the end of my BLOG CANDY Give-Away!!! This weekend is the LAST CHANCE YOU’LL HAVE to vote for which Tutorial you most want to have me do for you, & YOUR VOTES are WHAT enter YOU into MY BLOG CANDY Give-Away!!! As an added incentive, I’m going to reveal a little hint about what the Grand Prize Winner will receive. The GRAND PRIZE Winner will receive a really cool CRICUT Cartridge !!! WooHoo!!!!!! I've put together a partial list of possible tutorials I’m thinking of doing for you here on my blog & what I want you to do is to vote for your TOP 3 (and BTW, if there's something else that I don't have listed here that you'd like to see, feel free to substitute your suggestion for mine!!). To vote, just go to the COMMENTS section at the end of this thread & post a COMMENT !!! That will automatically enter you in my BLOG CANDY Give-Away. And BTW, you may ENTER MORE THAN
111 comments
Read more

Glenda
I'm known as the original "Gadget Queen", & "The Queen of Crafting Tools" because I have a fascination for & absolutely love any kind of crafting tools/gadgets!! I especially love the Cricut & the Close to My Heart product lines & try to use them every day. I've been happily married for almost 40 years to my amazing husband, Moe. We own a local business by the beach on Main Street in downtown Huntington Beach, CA and are active in the business community here. We're the parents of 3 wonderful sons who are all now young adults & so far we have 2 adorable Grandsons from our oldest son & his wife!!. These men in my life make it worthwhile to get up every day and they're the reason I started scrapbooking in earnest, so that I might leave a record of our lives together, and to be able to show them all how very much I love them!